In the last Blog entry, We have covered the “Star Wars – A New Hope” with the books of Ezekiel and Revelation
To make sense of it, we must go to the 4th Star War movie released , yet bringing us back to the beginning – “The Phantom Menace”
Genesis and Revelation opens and closes the Bible.

Genesis & Importance of Foundation
We covered part of the foundation process in the last podcast but let’s go a little deeper
What are the most attacked books in the Bible?
Genesis and Revelation, the first and the last.
• Sometimes this can come even from 'friendly fire' within 'the church’

Genesis is the beginning of God's revelation and introduces important themes, such as
• The Creation and the Creator,
• Man's dominion on Earth,
• Marriage,
• The deceiver and the fall of mankind.
• Given the first promise of a Redeemer.
This book would come under heavy attack by the enemy and his workers.
Why?

Being the first book of the Bible, and the first to introduce these important themes, Genesis forms a foundation for the study of God's word.

How important are the foundations?
Psalm 11:2-3 says “For, behold, the wicked bend the bow, they make ready their arrow upon the string to shoot in darkness at the upright in heart. If the foundations are destroyed, What can the righteous do?"

When the enemy takes aim, he often goes for the foundations. As the scripture I just read says, “if the foundations are destroyed, what can the righteous do?”

Now let’s look at Revelation & Importance of Hope
Revelation has also been attacked, or in many cases, just ignored.

It is the only book in all 66 books of the Bible, where God has given a specific blessing for the reading and keeping of its words.
In fact, He gives it twice:
'BLESSED is he who reads and those who hear the words of this prophecy and keep those things which are written in it; for the time is near.’ (Revelation 1:3)
"And behold, I am coming quickly. Blessed is he who heeds the words of the prophecy of this book." (Revelation 22:7)

POINT: The word “keep” can also be translated from the NASB, 'heed'.

Think about what the prophecies mean and the implication for your life.
What does it mean for you that:
• Yeshua could come back soon?
• Judgment upon the world is coming?
• There is a heaven, and we shall stand before the Son of Man?
• When Yeshua (Jesus) returns His rewards are with Him?
• There is a new heaven and a new earth coming?

There are reasons why there is a special blessing given to those that read this book
• It ties the rest of scripture in together, providing a wonderful ultimate fulfillment of God's plan
• It gives tremendous hope for the believer in what is to come - the best is yet to come!
• It shows that God is in control.

When reading the book of Revelation note how many times it speaks of 'the throne' in Heaven.
o The word 'throne' is used 35 times
• It pictures God, even while there is judgment and chaos on Earth, as sovereign and in total control.
• It presents the Messiah in His glory and as the King of kings, the LORD over all the Earth.
• It focuses the believer on eternal matters (scenes in Heaven, the coming judgment, the New heaven, and new earth (Colossians 3:1)

Let’s look at what I would call The Genesis - Revelation link
God's Word forms a great golden circle of truth, beginning with Genesis, which is the book of beginnings, and goes through the Testaments until we come to the glorious book of Revelation—the book of the final things; and then it dovetails promptly back to the book of Genesis.

A comparison of Genesis and Revelation makes this plain, and shows how we have the types in Genesis and completion of the truth in Revelation:
• In the one book it is the beginning, In the other, the ending
The Word of God is one absolutely perfect, unbroken, unbreakable circle. 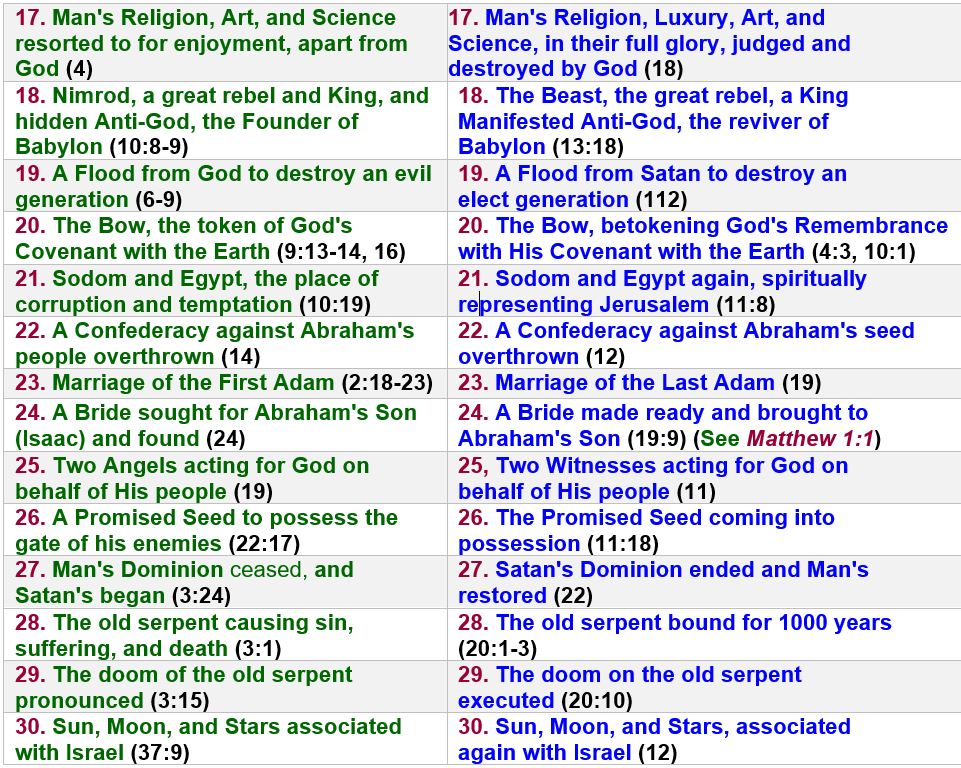 After looking at these parallels, it shows God is consistent from the Tanakh (Old Testament) to the Brit Hadashah (New Testament)
• It's reassuring to us because God has a plan.

What does this tell us? 4 things
• It's an additional confirmation of the canon of Scripture.
• This parallelism really isn't arbitrary nor random.
• There is a purpose behind these books.
• The canon of Scripture is complete from Genesis to Revelation

Why?
1. They had the same author (that's because, though written approximately 1500 years apart, they do!)
• Both are 'God breathed'! (II Timothy 3:16)
2. There was a plan right from the beginning and coming to fulfillment in Revelation.
That's because God has a Plan!

We could not leave these two blogs without talking about “the Force”.
Obi-Wan described “the Force” as universally accessible, at least in theory.
It binds us.
He described it as “The Force is what gives a Jedi his power. It's an energy field created by all living things. It surrounds us and penetrates us. it binds the galaxy together.”

Luke, in “The Last Jedi” tells Ray that the Force is the energy between all things, a tension, a balance that binds the universe together.

In “The Empire Strikes Back”, all you needed to do was to train hard.
There was no stated reason why anyone could not become a Jedi.

Question: How would you describe the “Force?”
Is the Force just passed from one generation to another or is it outside the generation and everywhere?
Anakin Skywalker came from nothing.
• He and his mother were slaves.
At that time, the Jedi was an elite, remote order.
Anakin goes to the dark side and becomes Darth Vader.
Darth Vader became the father of Luke Skywalker and Princess Leia.
Han Soto and Princess Leia get married and have a son named Ben Solo.
Ben crossed over to the dark side.
Is the force connected to just certain families?
The Answer depends on Ray

In “The Force Awakens” Ray came from nowhere, whose parents sold her, and left, never to return.
Ray broke the mode and became the first fighting female Jedi.
The movie, “The Last Jedi” became Ray’s walk as a Jedi.

It also answers the question about the Force.
The “Force” can be a metaphor for God.
But the “Force” is not God.
It is not a judge of good or evil.
It deals with the creations of mortals, not a higher power watching over them

“Look now! I AM, and there is no other god besides me. I myself cause death and I sustain life; I wound severely, and I also heal; from my power no one can deliver.” Deuteronomy 32:29
As we “train” to the “Good Side” God becomes stronger in us.
As that happens, we become more humble in his presence.
Is God the force in you?
If He is, how does God’s power change you?

Tweet
More in this category: « Star Wars, Ezekiel, and Revelation
back to top