To understand Blog teaching, we are going through the correct order of “Star Wars.”

If you are like me and the first movie you saw was “Star Wars - A new Hope”, how would you understand the “Force”?
• That is like trying to explain Isaiah 65 – 66 without the background of the rest of the scripture

To Understand, you must go back to the beginning.
That is “The Phantom Menace” where it is introduced, to “The Rise of Skywalker” where it is explained more fully
Why is it NOT SUFFICIENT for Believers to look to the Reformation, to the Church Fathers, or EVEN to the Brit Hadashah, in order to establish the Foundation of their Faith?

ANSWER: God NEVER CHANGES and NEVER CONTRADICTS Himself.
What does that mean?
We can be assured that those things which we believe concerning Yeshua have their Beginnings, their Roots, and their Foundation in the Torah
– The FIRST Main Body of Revelation given by God to Mankind was the Book of Genesis
But - To justify the concept, we must lay a Foundation

Laying a Foundation
In Agriculture, there is a season for planting, another for waiting and a time for harvesting.
You cannot expect a seed to produce its harvest outside its time and season.
• A Foundation must be laid first

Here is an Engineering Point: When a foundation is laid, the height of the building is already determined.
Example: The Empire State Building
The total foundation is 55 Ft below ground.
If the foundation were off by ¼” the building would have collapsed when they were working on the 101st Floor.
The 102nd Floor Observatory would not have been built

Luke 6:47-49 reads, “I will show you what he is like who comes to me and hears my words and puts them into practice. He is like a man building a house, who dug down deep and laid the foundation on rock. When a flood came, the torrent struck that house but could not shake it, because it was well built. But the one who hears my words and does not put them into practice is like a man who built a house on the ground without a foundation. The moment the torrent struck that house, it collapsed, and its destruction was complete.“
In our current age all of the above foundations are under attack.
We currently live in an age where the foundations of our faith, our nation and family life, are being seriously undermined.
Destroy the foundation and the building collapses

Why is this important to us? - 4 Reasons
• It is important for a proper and solid foundation to be laid so that it can carry the weight of the blessings and challenges to come.
• The deeper we can lay our foundation in the Word of God, the higher the potential of the House that God can build in us.
• Very often we are not ready for the blessings God has for us so that when they come, we do not see them, and they pass over
• You have to understand your seasons of change because good planning takes place during those times.

The Problem: We are not patient.
We want to grab what we perceive in our spirit quickly.

Let’s look at the Foundation of Ezekiel

Now let’s take a look at the Foundation of Revelation

Foundation of Revelation = “But God”
The book of Revelation is a book that drives home the point of “But God.”
Satan, the Anti-Christ, and the False Prophet all say “my way”,
• “But God” says, “No Way”

What does this comparison reveal?
• Both these books deal with the same destruction of Jerusalem
• They both end with the same symbolic picture of the establishment of God's New Jerusalem (Kingdom of the Body of Messiah) in the earth.

These comparisons show that most of Ezekiel dealt with events relevant to John's day; however, it does contain some prophecies that were relevant to Ezekiel's day.

With this information, let’s compare Revelation with Ezekiel 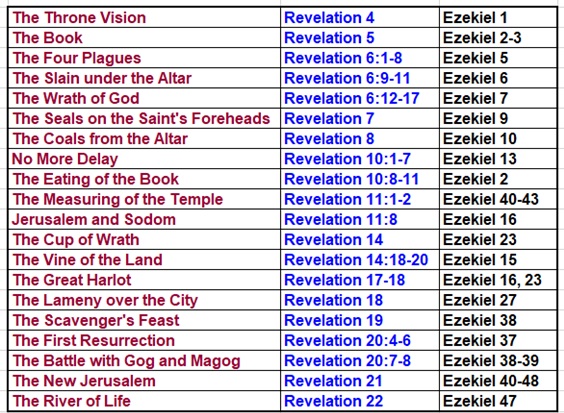 This shows the power of the “Force” running through the book of Ezekiel and Revelation, but how does the Force connect to the books of Genesis and Revelation?

To find out, you have to read the next Blog teaching. Until then …

Tweet
More in this category: « Yeshua, the Living Torah Star Wars, Genesis, and Revelation »
back to top