Why a Physical Life?
A soul is formed in the womb of supernal spiritual realms, where it acquires its distinct identity and mission.
To fulfill this mission, it is dispatched to the physical realm, and equipped with a body.
• Because of this, Divine reality is obscured by the dense selfhood of the body and physical world.
In this arena of hidden truth and perpetual challenge, the soul can fully express and actualize its divine power

Guidance & Nurture
The soul is provided with a compass and guidebook to navigate the challenge of physical life, and the resources to fortify it.
The Torah is the divine "blueprint for creation" that guides and instructs the soul on its mission in life.
The Torah is also "food for the soul":
• By studying Torah the soul takes in and digests the divine wisdom and is supplied with the divine energy to persevere in its mission and overcome its challenges

Understanding of Soul
Based on the scriptures, what is your understanding of the word “Soul”?
If you believe that the human soul has no knowledge after you die until the resurrection, how would you explain this scripture?
Revelation 6:9-11 reads “When he opened the fifth seal, I saw under the altar the souls of those who had been slain for the word of God and for the witness they had borne. They cried out with a loud voice, "O Sovereign Lord, holy and true, how long before you will judge and avenge our blood on those who dwell on the earth?" Then they were each given a white robe and told to rest a little longer until the number of their fellow servants and their brothers should be complete, who were to be killed as they themselves had been."
This is before any Resurrection.

Animal Soul
Another question: Does an animal have a soul? If it does, is there a difference, if any, between an animal’s soul and a human’s soul? What would be that difference?
After you have answered these questions, how would you explain this scripture?
Proverbs 12:10 in the modern King James Version, reads “A righteous one understands the soul [Nefesh] of his animal.”

This explains the following scriptures:
Exodus 20:10 - The Sabbath is extended to the domestic animals
Exodus 22:4, 23:5 - A man should help the over-burdened beast, even of his enemy
Deuteronomy 22:10 - The unequal strength of the Ox and the ass should not be yoked together
Deuteronomy 25:4 - The Ox should not be muzzled when it was treading out the corn
Deuteronomy 22:6 - The sitting bird should not be taken from her little brood
Exodus 23:10 - Do not boil a kid in its mother’s milk (fat)

EVERY living creature, including mankind, has an “Animal soul” (Nefesh)
The Divine Essence of the human soul is what sets the human being above and apart from all other creations, even the angels.
The angel may be more spiritual, but the human being is more Godly.
No creation can possess true freedom of choice--a creation, by definition, has and consists of only what its creator has imparted to it.
This is its "nature," and its every inclination and action will be dictated by that nature.

5 Words for “Soul”
A word in Hebrew can be used in a number of different ways.
The word “Shalom” can mean “Hello”, “Good-By”, or “How is your well-being?” depending on its context.
A common way that is taught of explaining the three parts of the soul is as follows:
• Nefesh (נפש): the lower part, or "animal part", of the soul.
o It is linked to instincts and bodily cravings.
o This part of the soul is provided at birth. (primary place: liver)
o It is possible to make holy even daily habits, such as eating and working.

• Ruach (רוח): the middle soul, the "spirit".
o It contains the moral virtues and the ability to distinguish between good and evil. (primary place: heart)
o “Knowing heart”— a heart that knows that whatever happens in the world comes from God.

• Neshamah (נשמה): the higher soul, or "super-soul".
o This separates man from all other life-forms.
o It is related to the intellect and allows man to enjoy and benefit from the afterlife.
o It allows one to have some awareness of the existence and presence of God. (primary place: brain)

This tells you the strength when there are FIVE different Hebrew words that define the Soul.
They are:
Nefesh - Animal Soul (Driven by self-preservation and self-enhancement)
Ruach - Spirit (used to send the “spark of Godliness” to the Nashamah)
Nashamah - Godly Soul (Driven by the desire to reconnect with its Source)
Chayah - Life of the Soul
Yechidah - The essence of the Soul (Oneness, Singularity) 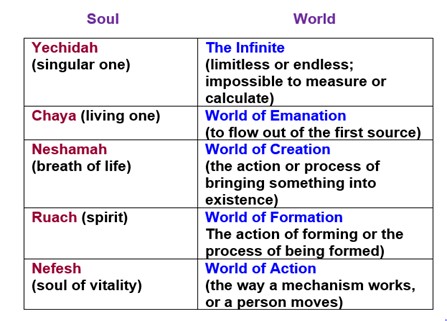 What consists of the “animal soul?” Nefesh+Chayah+Yechidah.
When life (Chayah) ends, there is no resurrection for the animal.
The “Yechidah” is connected to its children.
If you doubt it, attack a bear cub, with Mama Bear seeing it.
The human being has all five connections.
When the animals were created, life was given to them by the word of God.
- This is not so with mankind.
Genesis 2:7 reads “Then the LORD God formed man of the dust of the ground and blew into his nostrils the soul of life, and man became a living being. (Speaking Spirit)” (The Chumash)

God made man out of both lower (earthly) and upper (heavenly) matter
- His body was from the earth
- His soul was from the spirit
The Zohar says “One who blows, blows from within himself”
- Man’s soul is part of God’s essence
- This made man a living being

It is this “breath of God” that changes the life of the Soul (Chayah) to eternal.
It is the “Yechidah” that connects to God and produces fruit for His kingdom.
If the fruit is not produced for the Kingdom means the “Ruach” (Born Again) has not connected to the “Nashamah.”
Without this fruit, and death occurs, the “Chayah” (Eternal life with God) is rejected by God.
With the fruit, the “Chayah” (Eternal Life with God) is accepted and joins God in Paradise.

A Picture is worth a thousand words.

With this understanding, you now understand Yeshua’s prayer in the scriptures of John 17.
Look at verse 11: “I am no longer in the world, but they are in the world, and I am coming to you. Holy Father, protect them by your name, the name that you gave me, so that they may be one, as we are one.”

The World to Come
Ultimately, the soul will re-united with the body.
In the Messianic Era, the resurrection of the dead will usher in a "World to Come" of eternal physical life, in which "death will be eradicated forever."
In the World to Come, the entirety of creation will fully reflect the infinity and perfection of its Creator, and the physical will transcend the finitude and mortality which define it in today's imperfect world.

Tweet
More in this category: « Our Website Continues to Grow and Bless The Jewish Soul Part 1 »
back to top