On October 9 of this year my wife and I went to Universal Studios. When I retired from Universal Studios, I received a “Silver Pass”. This pass allows me to enter the parks any time at no cost. I may bring one guest. That guest will always be my wife.

At the same time we considered the wish to honor Abby and Hannah before we entered Universal Studios. I opened my website and downloaded the information needed to produce two free tickets to get into the two parks.

Upon arriving at Universal Studios, we went through the line of the people buying their tickets to enter the park. The hunt was on to find two people, women, to give the free tickets in honor of Abby and Hannah. After talking with several people, we made our choice.

This time we went international. We gave two tickets to three girls, all from Saudi Arabia. The name of the first one was Reya, and the second girl was May. The last one was a young woman named Dee. 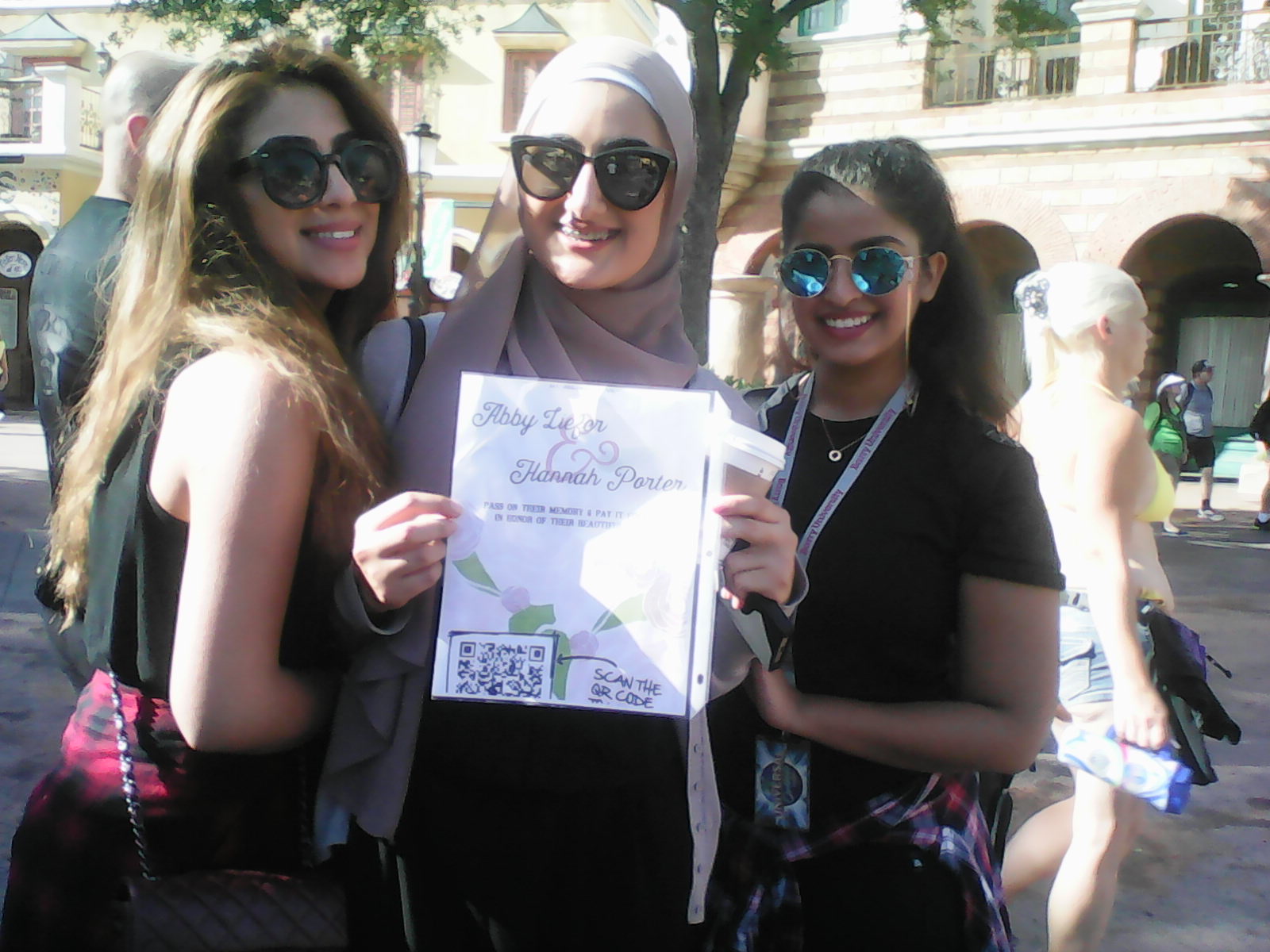 Above are the pictures of the three girls. Dee is the one in the middle and the one who paid for her ticket. The two girls on each side, Reya and May, were the ones who got in free.

They were so excited about what they received they changed their plans. They would use the money they did not pay to get in to “Pay it forward” for other people that day in honor of the two girls.

I have never met Abby and Hannah, but I will never forget them. These two girls have marked my life in ways I cannot explain.

If you want to know their story, go to the “mission” page of this website. If you click on the picture or the Facebook location it will open to their Facebook page explaining their story.

They were friends during their entire lifetime and died in the automobile accident on January 10 of this year. A month later, February 10, became known as the “Abby and Hannah Day”. When the newspapers and TV News connected with this story, random acts of kindness became the norm.

Because of newspapers, TV News, and Facebook, more people did random act of kindness the month after their death (February 10) then the entire population of the town of Red Bud, where I was raised.

When their friends created their Facebook page with their story, and what they wanted to do, the story went viral. On that one day, over 10,000 people were doing individual acts of kindness in honor of these girls.

If this process “pushes your button,” do something nice for a stranger in honor of Abby and Hannah

Tweet
More in this category: « God is Moving in the Prison Ministry Go into your “Bubble” »
back to top