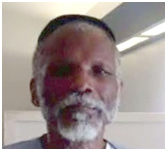 My name is Arthur Wright, and at 60, I am the oldest member of this family of sincere brothers. My middle name, Nathanael, was given by my wise great-grandfather, an immigrant from the Central American country of Belize, and an honored family patriarch. He insisted that I, his only great-grandchild, would someday be a preacher.

If we consider all things from Yeshua’s perspective, there is no such thing as random chance. The Almighty knows the end of all things from the beginning. And so, during the many years of my abandonment from the church, after the age of 12, I acquired a reputation for being an extremely analytical realist in matters of criminal enterprise.  Therefore, it is no coincidence that since my return as a prodigal son, I likewise embodied the character of that disciple of Yeshua’s “in whom there is no guile” in matters of spiritual truth, in order to be a genuine gift of God to my fellow man.

(John 1:47 “Yeshua saw Nathanael coming to him, and said of him, Behold an Israelite indeed, in whom is no guile!)

I am thus convinced it had been my blessed destiny from birth to ultimately realize that the foundation of the Renewed Covenant resulting from Yeshua’s crucifixion is the Torah, and to join the Messianic Movement’s representation of that Covenant.