What If I'm Wrong?: The Atheist's Nightmare is Published! 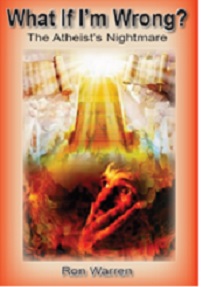 The Book, “What If I’m Wrong?: The Atheist’s Nightmare,” has been published and is now on Amazon. If you want to check it out,  Click Here

Now answer another question: What if you thought something was true, and you found out it was wrong, when would you want to know it?

Hell is Truth Seen Too Late!  Ron Warren was a good atheist. He applied five major battlegrounds that an atheist would use.

These battlegrounds asks the questions:

By applying doubt to the believer’s “WHY,” the same doubt would move into the “HOW” and the “WHAT” of their faith.

When Ron realized he was wrong, he began to use stronger facts to change the battlegrounds. God, to him, became the “God of the Second Chance.”

What does this mean to you?

As an atheist, you have your answers, but are you sure you have all the facts? What are the consequences if you are wrong?

As a believer, have you ever doubted your faith and wished you had answers to fight your battlegrounds? How do you counterattack what the atheist is giving you?

Do you know that the existence of God can be proven through Physics, Biology, Biochemistry, Genetics, Mathematics, and Paeontology?

Did you know that He can also be proven to exist through Archaeology, Astronomy, Cosmology, and Revelation?

Did you know there are ten evidences to prove that the Bible is true? As an atheist, can you explain all ten?

What would you do with the Resurrection? Did you know there are six major facts you must prove to be wrong?

How will you deal with the question, “Is Jesus (Yeshua) God?”

The highlight will be trying to explain the 19 Divine Attributes of God operating through only one man - Jesus, also known by His Hebrew name, Yeshua.

Can these evidences be placed on another human being?

This is the lifestyle of an atheist:

As an atheist, this was Ron’s life. “Is it yours?”

As a believer, have you ever doubted your faith and wished you had answers to fight your battlegrounds? How do you counterattack what the atheist is giving you?

This book opens the door to both the atheist and the believer. It can change or destroy the atheist’s foundation and strengthen and consolidate the believer’s trust and faith in God.

After reading this book, these questions must be asked:  Have we presented only circumstantial evidence or have we presented facts that can be tracked, studied, and tested by many sources?

Have your answers given you any cause to rethink your position?

As a member of the jury, the decision is yours, but ask yourself another question: What if i'm wrong?

Comodo SSL
We use cookies to ensure that we give you the best experience on our website.
I accept